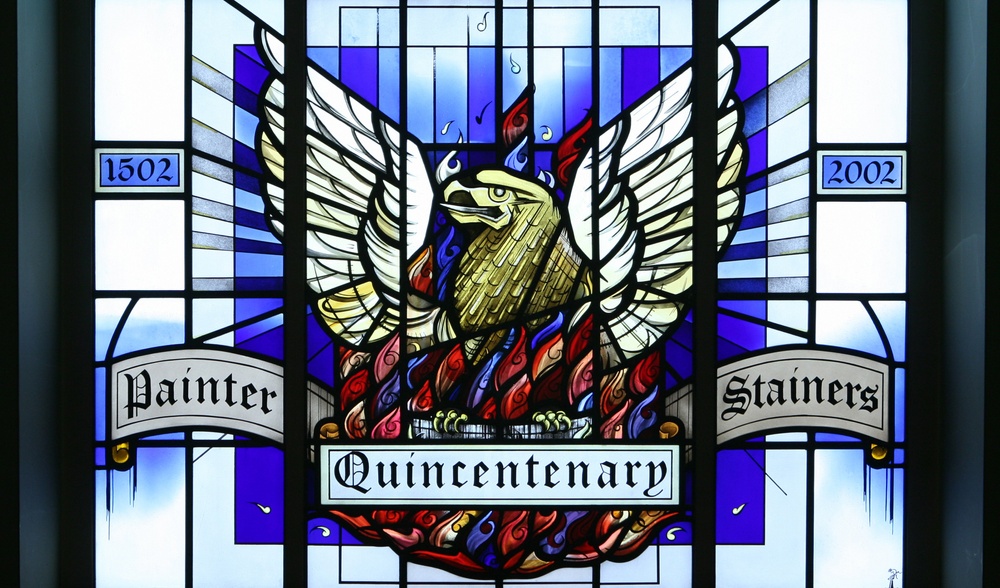 History of the Company

Guilds evolved during the Middle Ages when tradesmen who specialised in the same areas of work made informal arrangements amongst themselves for protecting their trades, regulating competition and maintaining professional standards. Artists joined together to form the “Paynters” Guild and the earliest reference to the Guild is in 1283 as appears from Ordinances recorded in that year.﻿

In 1466 an important set of Ordinances was granted to the Painters which were afterwards confirmed by Inspeximus, i.e. confirmation of a pre-existing grant. The Painters who decorated, gilded and coloured solid objects such as wood, metal and stone painted everything, from portraits to banners and barges and murals on walls and early records refer to the painting of saddles and the interior decoration of buildings, particularly churches.

Links with the Royal Court soon developed and the Painters’ Guild was at the centre of British cultural and political life and its first great figure was also the first recorded King’s Painter, Gilbert Prynce. He created a large panel painting of Richard II in 1394 which is the earliest surviving life portrait of a British monarch and which can be seen in Westminster Abbey by the tomb of the Unknown Soldier.

Also at this time, a separate branch of the trade, the “Steyners”, were producing decorative designs for pageants, processions, funerals and other ceremonies and created flags, streamers, banners and imitations of tapestry and they formed their Guild around 1400.

The early history of the Guilds was full of often violent disputes with other trades who claimed the right to do each other’s work. Most notably the Painters were in dispute with the Plaisterers, the College of Arms and the Stainers.In 1502 the Painters and Stainers, in the words of their joint petition to the Lord Mayor, were "knytjoyned and unyd to giders". The united guild was 29th in order of precedence of the City Guilds in 1515; 39th in 1532 and is 28th at the present time. 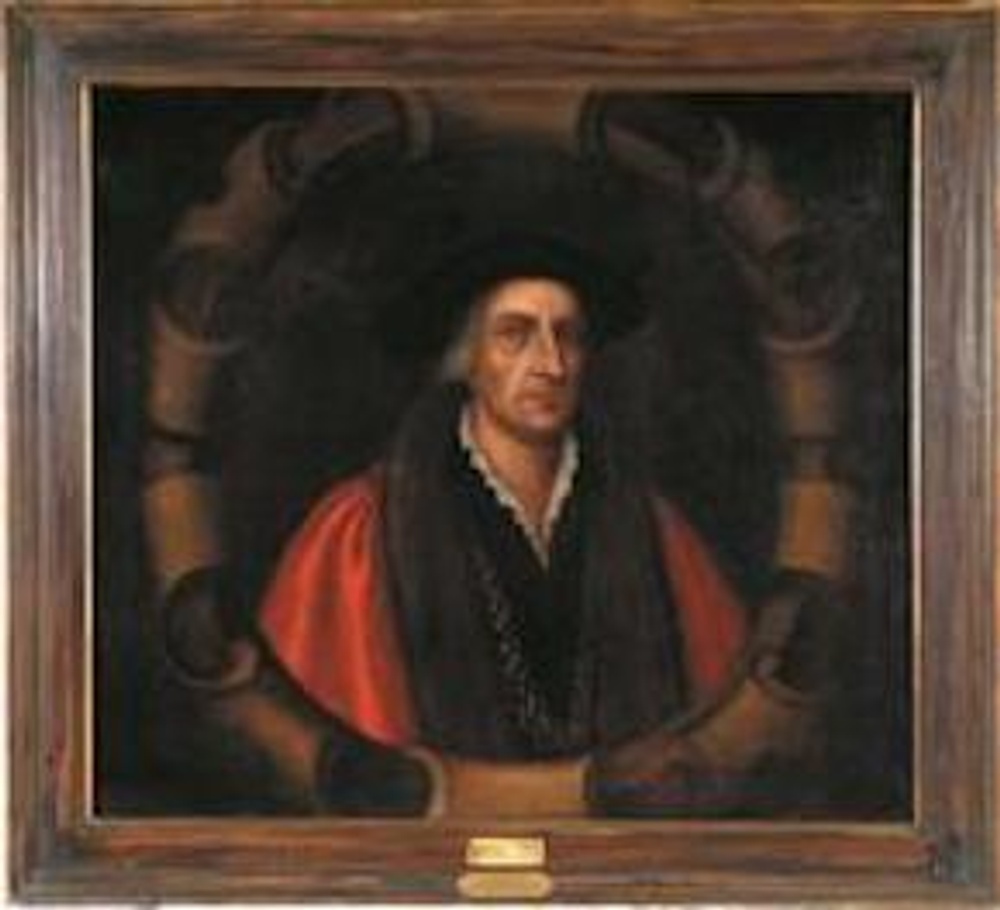 Alderman Sir John Browne, Serjeant-Painter to Henry VIII, died in 1532, and left to his brother Painter-Stainers his premises on the west side of Little Trinity Lane in the Ward of Queenhithe. This became Painter-Stainers’ Hall and its acquisition set the Company on the road to prosperity over the next 150 years. Hans Holbein, the most famous painter at Henry VIII’s court, was not a member of the Company, since foreigners could only join if they took out British citizenship, but his disciple, John Bettes, often regarded as this country’s first renaissance painter, was a member and he painted the earliest picture (1545) in the collection of the Tate Gallery – Unknown Man in a Black Cap. He was the first of a family dynasty of painters, all of whom joined the Company. His son, also John Bettes painted a portrait of Queen Elizabeth I and she approved of the Company because it maintained painting standards and made sure that the royal image was presented in the way she wanted it. 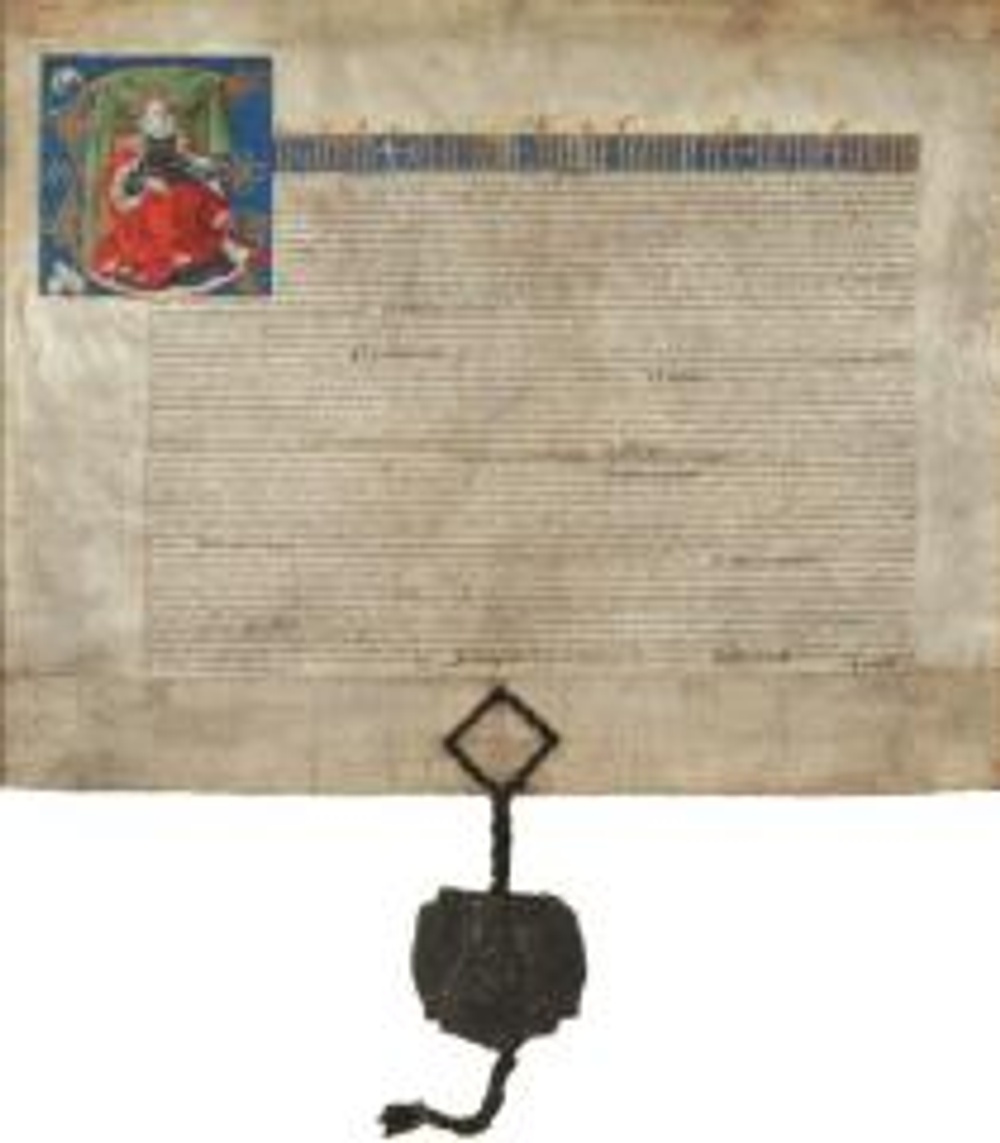 The Guild petitioned Queen Elizabeth in 1575 complaining of the practice of painting, particularly her portraits, by persons who had never been apprenticed. A subsequent petition was made to Lord Burghley in 1578 regarding the attempted control of arms painting by the Heralds and this together with the previous petition resulted in the Company receiving a full charter from Queen Elizabeth in 1581. By this time portraiture and landscape painting were important branches of the craft and the Company was sometimes called upon by the Crown to assess the value of the work done. 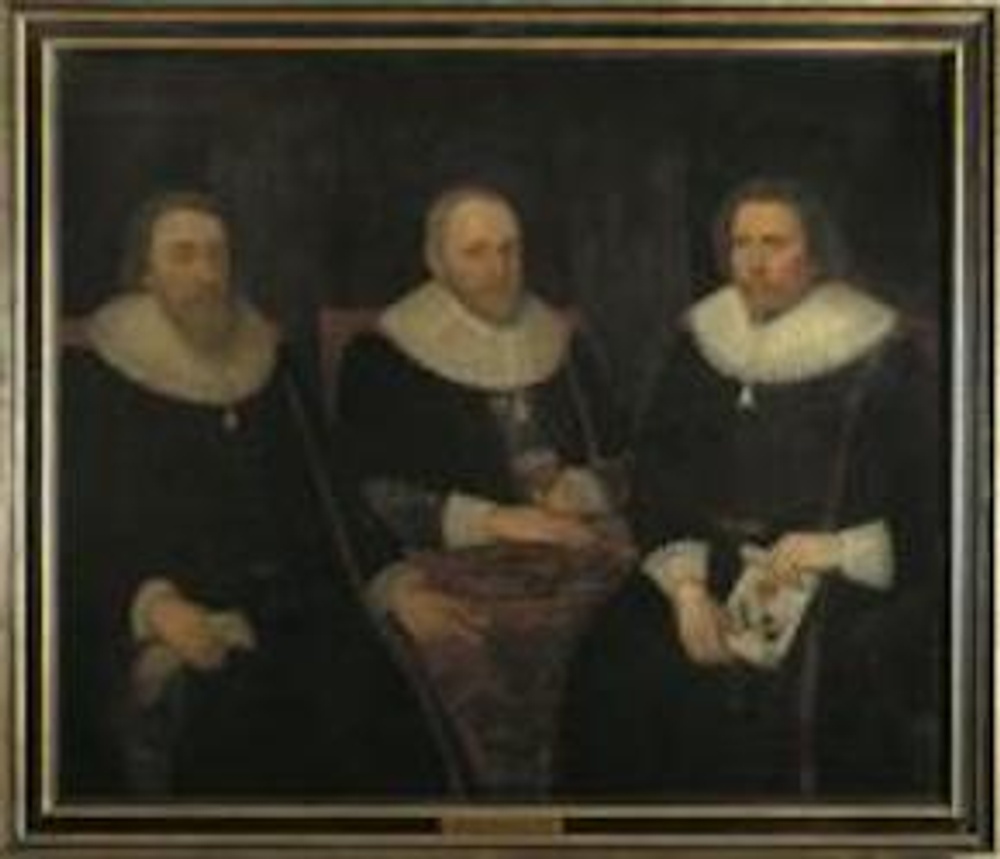 It is quite difficult to find a major British artist who was not a member of the Company in the Elizabethan and Jacobean age. We only have to look at the pictures of Masters and Wardens which hang in the Court Room, to realize that these men were prosperous pillars of society. The Potkin Group which shows Master John Potkin and his Wardens in 1632, includes to Potkins’s right the Upper Warden, Thomas Carleton, and to his left the Renter Warden John Taylor, who painted the only surviving life portrait of William Shakespeare. Known as the “Chandos” portrait, after a previous owner, this was the first portrait to be acquired by the National Portrait Gallery, when it was founded in 1856.

When the Royal Academy was founded in 1768 many artists joined that in preference to the Painter-Stainers’ Company, so, although the Company retained links with the fine arts and regularly elected the Presidents of the Royal Academy as Honorary Liverymen, it had to find other ways to develop. As just one example the Company played a leading role in the development and manufacture of wall-paper which was first mentioned in a Company document of 1626.

Company members also developed the decorative arts of marbling and graining, notably through the genius of Thomas Kershaw(1819-98), whose work,which was exhibited at the Great Exhibition of 1851,can be seen in Painters’ Hall and the V&A.

For some 130 years six generations of the Crace family were also at the forefront of Georgian and Victorian interior decoration and design and were involved with the Painter-Stainers Company, with three of the family becoming Master Painter; Frederick Crace (1851), John Gregory Crace (1879) and John Dibblee Crace (1884).

Their painted and gilded work is on the walls and ceilings of some of the country’s most prestigious buildings – Buckingham Palace, Windsor Castle, Carlton House, Althorp, Woburn, Longleat, the Palace of Westminster, the Royal Academy, Brighton Pavilion, Chatsworth, Taymouth Castle, Theatre Royal, Leicester, St James Theatre, London. Their designs were acclaimed at many international exhibitions both in England and abroad and the family business became the leading decorating firm in Britain in the second half of the 19th century. 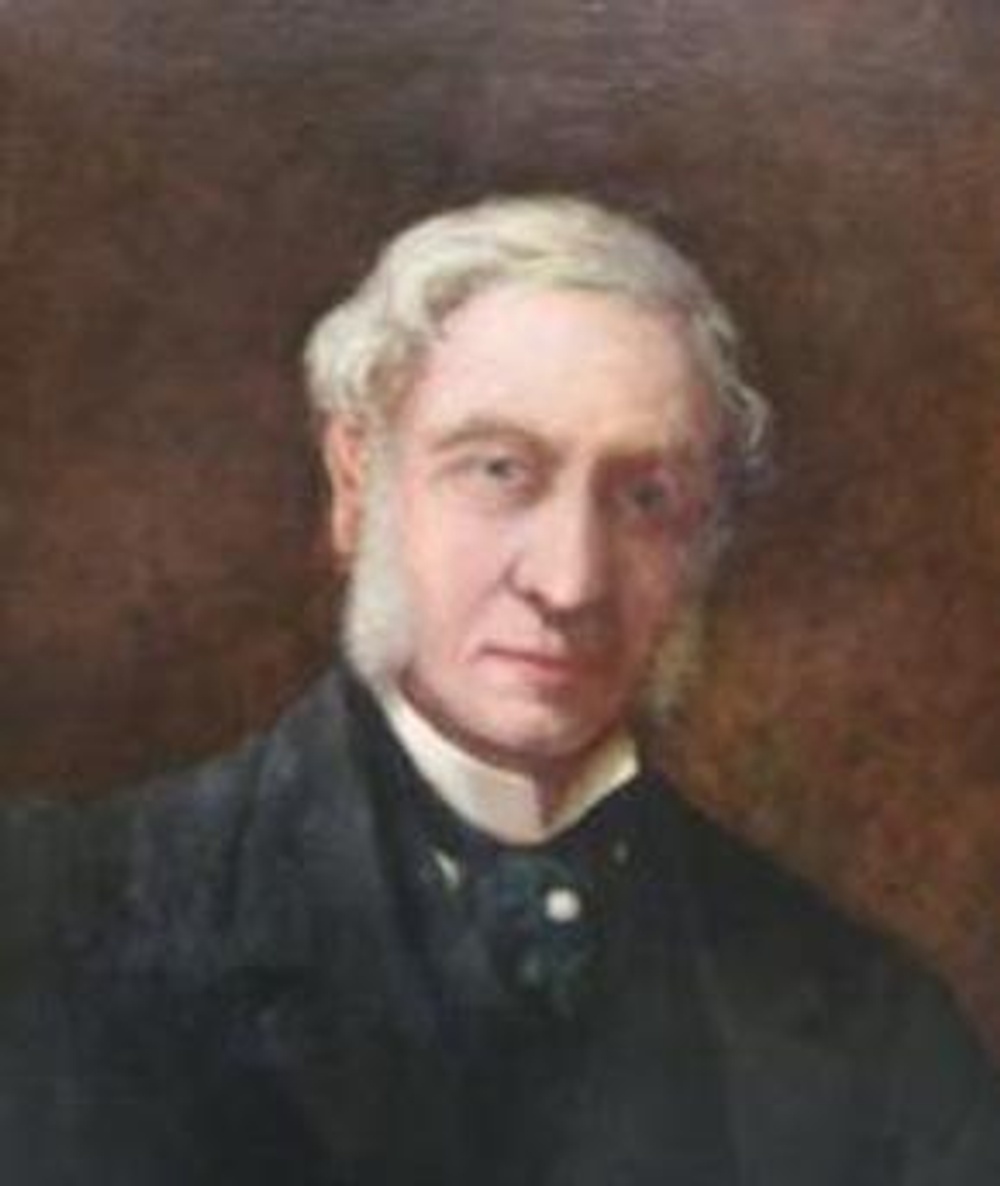 John Gregory Crace and his son, John Dibblee Crace, both made a significant contribution to the history of interior decoration in the form of lectures and publications. They were also prime movers in the establishment of exhibitions at Painters’ Hall, a School of Technical Instruction for painters and other tradesmen and the Institute of British Decorators with headquarters at Painters’ Hall.

It is significant that the multi-million pound re-opening of the original entrance to the National Gallery in London, the home of so many masterpieces of foreign painting, was centred on the restoration of the original decorative scheme by John Diblee Crace.

The domestic history of the Company until the date of the grant of its first charter and sometime thereafter was largely concerned with the supervision of painting work executed by members of the livery working in the City of London.

In the 19th century the Company’s energies turned to education and it claims to be amongst the first to inaugurate training in art and craftwork. In 1877 it supported technical education in presenting prizes and medals to the City of London School, the Freemen’s Orphan School, the Commercial Travellers’ School and the City and Spitafield School of Design. The fund for prizes was maintained by each member of the Court subscribing 1 guinea a year, the deficiency being made up from the Company’s Corporate Funds. In 1893 a conference of painters and decorators in Painters’ Hall resulted in the establishment of a technical class in the Carpenters premises in Great Titchfield Street and in 1899 the Incorporated Institute of of British Decorators was formed in Painters’ Hall.

This enthusiasm for education and training remains one of the driving forces within the company to this day.