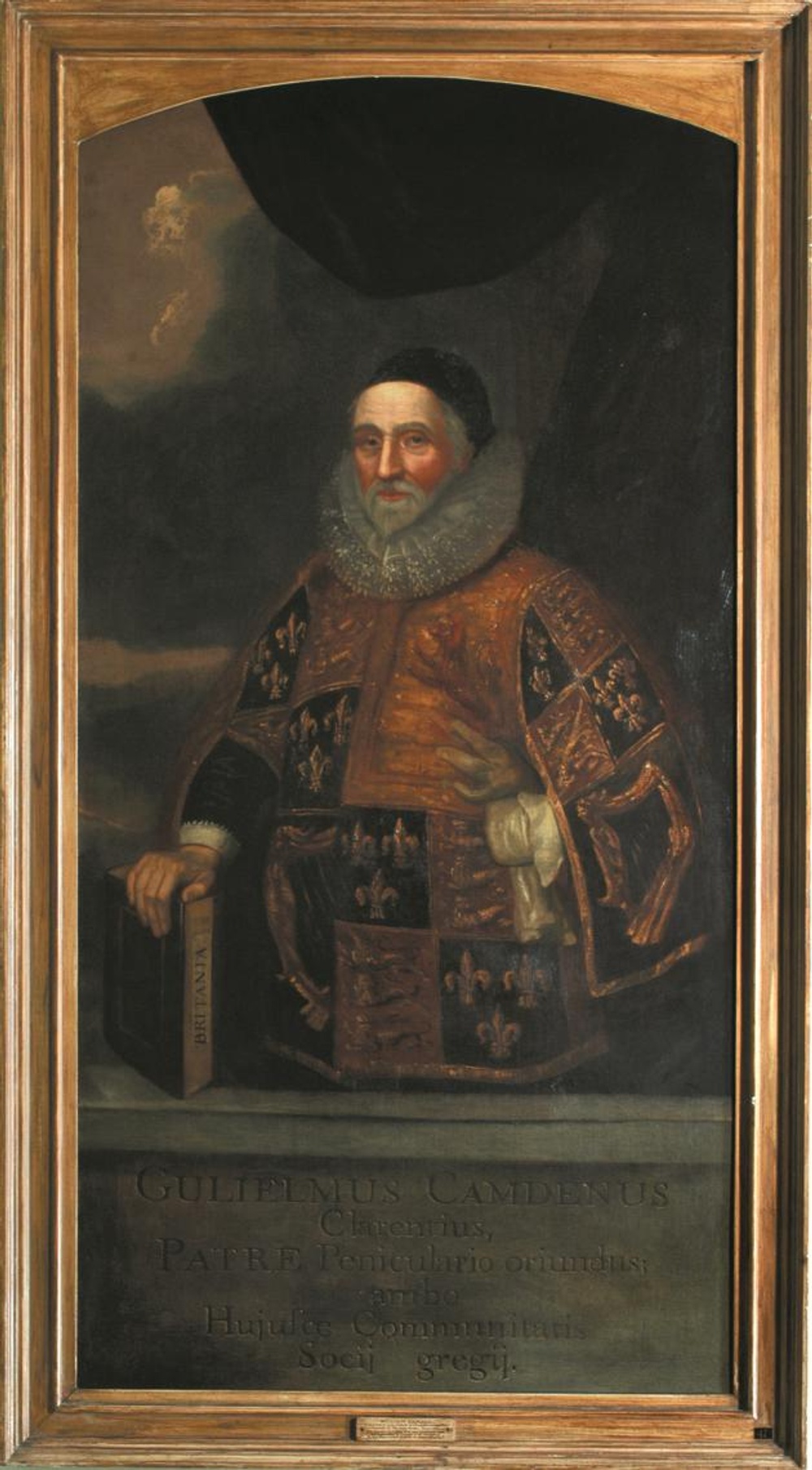 Presented by Silvanus Morgan in 1676, the year in which Morgan was elected Master. Camden is shown three-quarter length, above the inscription on a stone cill. After leaving Oxford with no degree he became Usher of Westminster School, and in 1593 its Headmaster, holding that post until 1597 when he was appointed Clarencieux King of Arms, a position he retained until 1623. In this portrait he wears the tabard of that office. He obtained the favour for the Company, of which his father Sampson was a member, that eight Painter-Stainers should be employed by the College of Arms. The inscription acknowledges his joint membership of the Company with his painter father. He holds a copy of his famous antiquarian work Britannia, published in 1586 as a comprehensive survey of the geography and history of the British Isles, from ancient times to the present, arranged by counties. This was in Latin; an English edition appeared in 1607, with accompanying maps and with an elaborate allegorical frontispiece. The poet and playwright Ben Johnson celebrated Camden in verse:

Camden! That most reverend head, to whom I owe

All that in am I arts, all that I know;

(How nothing’s that?); to whom my country owes,

The great renown, and name herewith she goes!

A traditional attribution to the Dutch artist Daniel Mytens (c.1590-1647), who was prolifically active in England at that period, cannot be sustained stylistically, though it is possible that the original portrait was by him, though it is more likely to have been painted by a member of the Company.

The picture may have been in its present condition when Morgan gave it to the Company in 1676, but other works in the collection, e.g. the portrait of John Browne, suggest that much repainting went on in the post-fire period, and the likelihood is that this canvas too was subjected to comprehensive reworking about that time, though perhaps somewhat later in the eighteenth century. In other paintings and prints Camden stands against a plain background; here he stands rather incongruously in front of a moonlit landscape with a swagged curtain over his head. This romantic landscape is not explained, and would suggest a date considerably later than the early or mid-seventeenth century, as would the general style of the painting. The portrait does not closely resemble the most famous likeness of Camden, by Marcus Gheeraedts the Younger (c.1561/2-1636) in the National Portrait Gallery. Rather, it seems to be related to another likeness, recorded in an engraving by Richard Gaywood (fl. 1660-80) and published in 1661 with this inscription beneath: ‘JOSEPH’S COAT NOBILITY DATIVE the second Booke by S.M. who dedicateth this Effigies, & Remaines of ye Learned Camden Clarentieux, to Sr. Edward Walker (alias Garter Principall King of Armes) for Englishmen’. Walker (1611-77) was a vigorous proponent of the exiled Prince of Wales, Charles, but later abused his authority to grant arms. Gaywood’s print shows Camden very much as in the Company’s portrait: he wears his tabard and has his right hand on a book, though the left hand is not as in the picture but also rests on the book, which lies flat on the cill and is not held upright. The features of the painted portrait are closer to those in this print, which is clearly an idealised likeness.

Camden’s iconography is confusing: the Gheeraedts portrait shows him with a long, thin nose terminating in a small bulb, and a pinched, elderly mouth lacking full dentition, whereas a print after Martin van der Gucht gives him (in his tabard) a nose almost aquiline. This image was almost exactly copied, on a larger scale, by Robert White for the 1695 edition of Britannia, but with the face altered to resemble more closely that in the Gheeraedts picture, which is less idealised and so surely the more reliable likeness. The Gaywood portrait is even more idealised than that by van der Gucht, having a perfectly straight nose; this is the likeness approximately repeated in the Company’s picture.

A pencil copy of the Company’s picture, by Henry Bone (1755-1834), enamellist and miniaturist to George III, George IV and William IV, appears in Bone’s abums of copies after pictures in English collections (three volumes, National Portrait Gallery). It is dated November 1807 and shows the picture very much as it is to be seen today (though without the inscription beneath), with Camden’s features as in Gaywood’s print and the swagged curtain above, but lacking the moonlit landscape.

In 1623, the year of his death, Camden presented a fine cup and cover to the Company and in 1637 the Renter Warden, Thomas Constable, was ordered to make payment for Camden’s portrait. If the present work is that picture (which was presumably executed posthumously), it seems to have been at least retouched at a later date. It is a question whether Gaywood’s engraving was based on the painting, but the alteration in the position of the book and of the left hand would then perhaps have to be explained.

In 1609 Camden took up residence in Chislehurst, Kent, where he died. His house was rebuilt by a later owner, Charles Pratt, who as Lord Chancellor took the title Baron Camden in 1765; Pratt’s house survives as Camden Place (now a golf club) having been the home of the exiled French Imperial family in the 1870s.