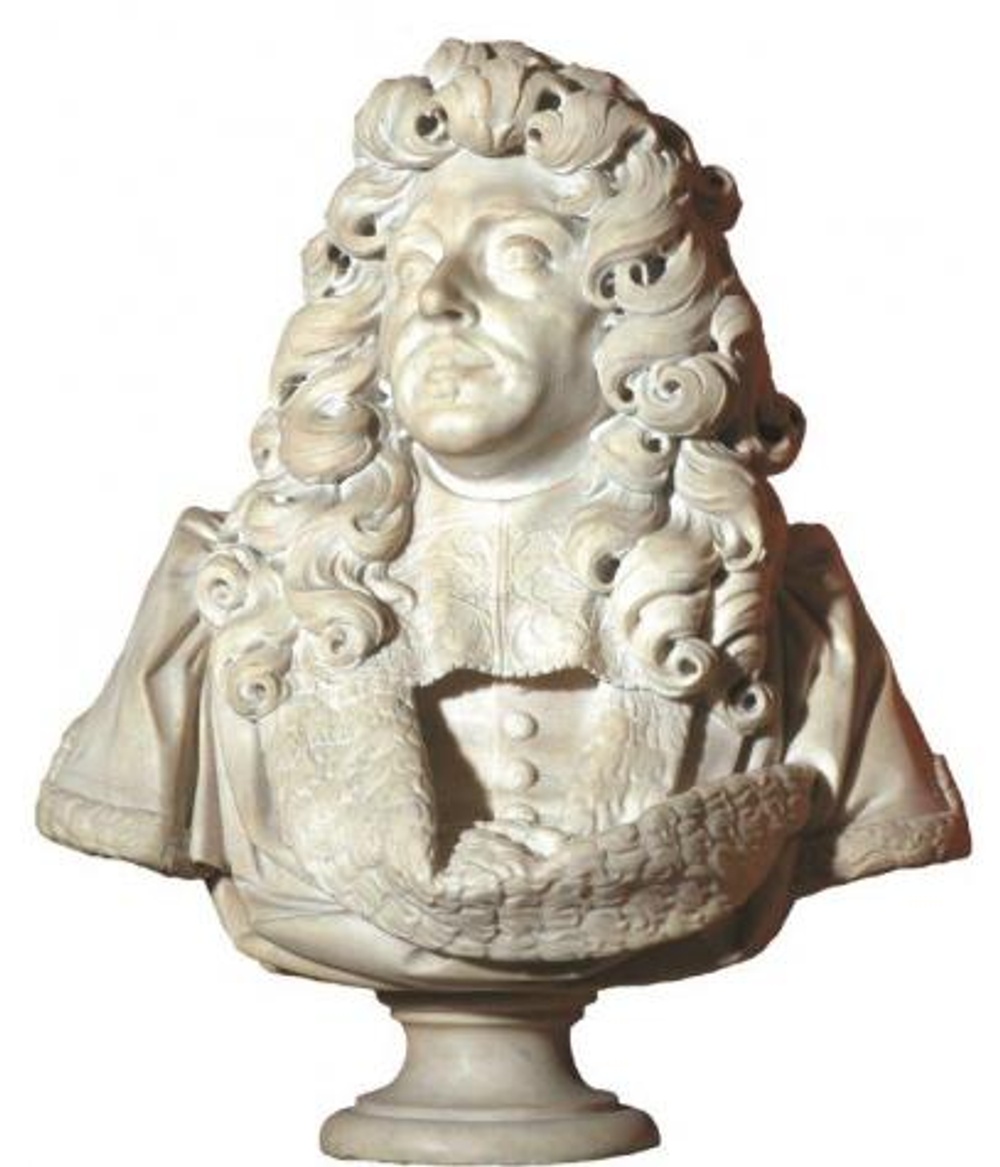 Thomas Evans was Upper Warden in 1664 and Master in 1666-67. Pearce’s bust may date from that time but is generally assigned to a decade later. It is a superlative example of Baroque portrait sculpture, reflecting the influence of Bernini – especially perhaps the bust of Louis XIV of 1665 at Versailles; another fine bust by Bernini, that of Sir Thomas Baker, dating from 1638, was in England, in Sir Peter Lely’s collection, by 1680 (it is now in the Victoria and Albert Museum). But Pearce’s bust is an assured and imaginative work in its own right. The spectacular undercutting of the sumptuously curled wig and the delicate lace bands at his neck are incorporated into the easy rhythms of an entirely natural and unforced pose which is at the same time grand and expressive of vigorous movement.

Most sculpture of the time to have come down to us with the artist’s name attached is by practitioners from abroad – van Nost, Rysbrack etc. Pearce reveals himself here as an independent master worthy to stand alongside them, and indeed was a prolific and celebrated artist, a sculptor in both wood and stone as well as painter, in his day. His father, also Edward, was a Painter-Stainer who died in 1658, an artist ‘of some repute’, as the Dictionary of National Biography says, as a painter of decorative panels and altarpieces for City churches, though none of these are extant.

Pearce attracted attention when he executed wood-carvings for Sir Charles Wolseley at Wolseley Hall, and went on to carry out much work for Wren at St Lawrence Jewry and several other City churches, as well as the Guildhall. The dragon on the weather-vane of St Mary le Bow was designed by him.The wooden swags and drops that he carved in 1664 to flank the front door of Painters’ Hall have survived the vicissitudes of fire and bombing, and are now in the entrance of the new Hall, and his glass-painting of the Royal Arms is also preserved in the Court Room.

In 1685, at the expense of the Fishmongers, he produced a statue of Queen Elizabeth for the Royal Exchange, for which place he also made a statue of Sir Thomas Gresham. His bust of Wren is in the Ashmolean Museum, Oxford.

His work was held in high esteem both in England and abroad. Rupert Gunnis, in his Dictionary of British Sculptors (London 1951), records a party given by the antiquary John Talman (son of the architect William Talman) in Rome in 1711: ‘around the walls were painted heads of famous Italian and English artists – Palladio, Raphael and Bonaroti [sic], on the one side, and Inigo Jones, [Isaac] Fuller and Pearce on the other.’

The bust was restored and cleaned by Taylor Pearce Restoration Services Ltd in 2017 which was paid for by a generous donation from Past Master Peter Hammerson (Master 2009).